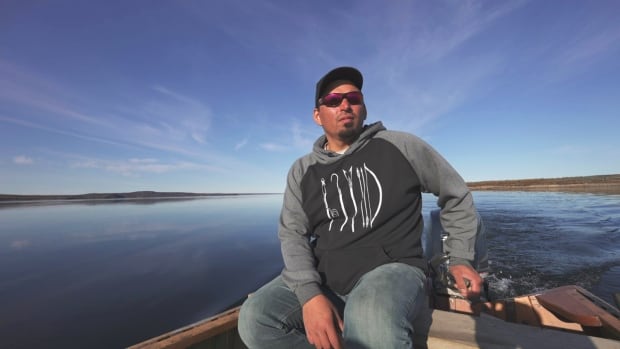 George Kauki pulls out his axe. With just a few strokes, he cuts six slices of frozen caribou for Panda, Yapper, Nanuk, Sakuk, Kajuk and Atsak.

Attached by a long chain under the autumn sun of Nunavik, the Inuit dogs crunch the meat provided by their master.

A few years ago, the roles were reversed, as it was Kauki who was supported by these trips to see his dogs. Under house arrest, after being involved in a violent altercation, he obtains court authorization to take care of his pack.

“I have an hour to do this every day. Just that hour of freedom, going to see my dogs when I was under house arrest, helped me so much,” he said.

Now a father of two, Kauki works at a rehabilitation center for people struggling with substance abuse issues in Kuujjuaq, Quebec, the largest community in Nunavik.

As part of his work as a “land specialist”, he helps participants learn or relearn Inuit traditions, heal their inner rage and better understand the intergenerational traumas that haunt them. In short, follow the same route he has already traced.

But Kauki would like to go further. He is now working to adapt the justice system to the realities of Nunavik, instead of forcing the Inuit to conform to a model imported from the south.

And the legal process in northern Quebec is in dire need of an overhaul, according to several officials and experts who spoke to Radio-Canada as part of an investigation into the legal system in Nunavik.

The 35-year-old has seen justice from all angles. For three years, he was a police officer patrolling several of the 14 communities that make up the northern Quebec region of Nunavik. He didn’t want to carry a handgun at the time, judging his word as his best weapon.

“People just feel threatened by a gun,” he said. “The main thing I always used when I came into the house to settle a situation was my mouth to calm people down. Just asking what’s wrong and what’s going on, trying to solve the problem .”

But the hours were long. Above all, the work generated unbearable pressure. In these communities where everyone knows each other, it is not easy for an Inuk to apply the law. After three years, he surrendered his badge.

“Overworked, stressed, especially caring for family and friends was very tiring, mentally and physically,” he recalls.

Shortly after retiring, Kauki fell on the other side of the law. After an evening with friends in 2011, he comes across an ex-colleague who was on duty. During a confrontation, Kauki seriously injures the policeman and begins his own journey through the justice system in northern Quebec.

“He grabbed me, and that’s when my defense mode kicked in. I just lost it from there. Just rage came out of me,” he said. -he declares.

“I ended up hurting a police officer pretty badly and wanted to kill myself, which was the hardest part for me, and I just wanted to end it there. But I finally calmed down and looked at the situation and I said, “I have to go through this. It’s too late.'”

If you are thinking about suicide or know someone who is, help is available nationwide by calling toll-free 1-833-456-4566, texting 45645 or chatting online with Crisis Services Canada..

If you think your mental health or that of a loved one is at risk of an immediate crisis, call 911.

A series of obstacles

Kauki quickly experienced the many challenges inherent in the Nunavik justice system: the recurring delays before appearing before a judge, being taken to detention thousands of kilometers south and the constant struggle to obtain efficient services.

His transfer to the Amos detention center in Abitibi, before his bail hearing, was particularly painful. Like many Inuit on their way to a prison in the south, this ex-policeman marched in front of members of his community at the Kuujjuaq airport.

“Literally, I had to lose my dignity and people’s respect. People must have looked at me at the airport in a weird way as I was handcuffed, shackled and a policeman was by my side. C was very embarrassing.”

In Amos, he saw southern inmates get their bail hearings quickly, while he waited nearly three weeks to return to Kuujjuaq for a court hearing.

His first lawyer suggested he plead guilty and end it quickly, predicting he would get a year in prison. He took on a new lawyer, even if it meant paying out of pocket, because he wanted to avoid a prison sentence at all costs.

He also had to travel south to find a psychologist to assess his case, because the only psychologist in Kuujjuaq was a friend of the victim.

Eventually, Kauki’s new lawyer helped him stay in Nunavik, where he was placed under house arrest. During this period, he had to collect his weapon at the police station each time he wanted to go hunting and bring it back when he returned.

Still, he says avoiding jail was essential to his rehabilitation. And those hours of freedom on earth gave him hope.

“The land has given me peace, allowed me to think straight…so I can just focus on what’s ahead of me rather than getting stuck with my head,” he said.

Like Indigenous peoples across the country, George Kauki says it is impossible to understand his situation without considering the history of his people and the consequences of European colonization.

He grew up in poverty, suffered from the housing shortage which is one of the main causes of the high crime rate in Nunavik and was affected by alcohol consumption. A sober man for several years, Kauki cites the need for individual responsibility when speaking to his clients at the rehabilitation center.

“I try to convey the message that you control yourself and no one else controls you,” he explained. “There may be obstacles in the way, but you will overcome them eventually.”

Kauki echoes the concerns of many Inuit when he speaks out about the disconnect between the justice system and traditional northern culture.

“The system was created by white people, people from the south, so it’s not made for the Inuit. People don’t even know what the law is. We are not taught the law in our schools. We stumbled upon it by accident. “

Justice in Inuit communities had long been under the control of the community and the elders. Problems were resolved more quickly, within the community, with an emphasis on rehabilitation. The long-term solution for the Inuit, according to Kauki, is to return to these traditions.

The ex-officer believes that the role of the police must be reviewed. He is particularly inspired by the work of Mohawk blue helmets.

“They’re not here to drop the book on you. Peacekeepers could literally calm things down, separate people and watch people,” he said. “If things were kept in peace, I think things would be so much more different here.”

Kauki considered a career in politics, but says his criminal record held him back. While waiting to decide whether or not to enter the public arena, he is working on the creation of an association called the Nunavik Civil Liberties Association, which will defend the interests of the Inuit in terms of access to housing, education and justice.

“We don’t have anything like that in Nunavik for equal rights. We get next to nothing here, compared to what you get down south,” he said. “I want to move on to something where I can actually make a difference in the region, in my community.”