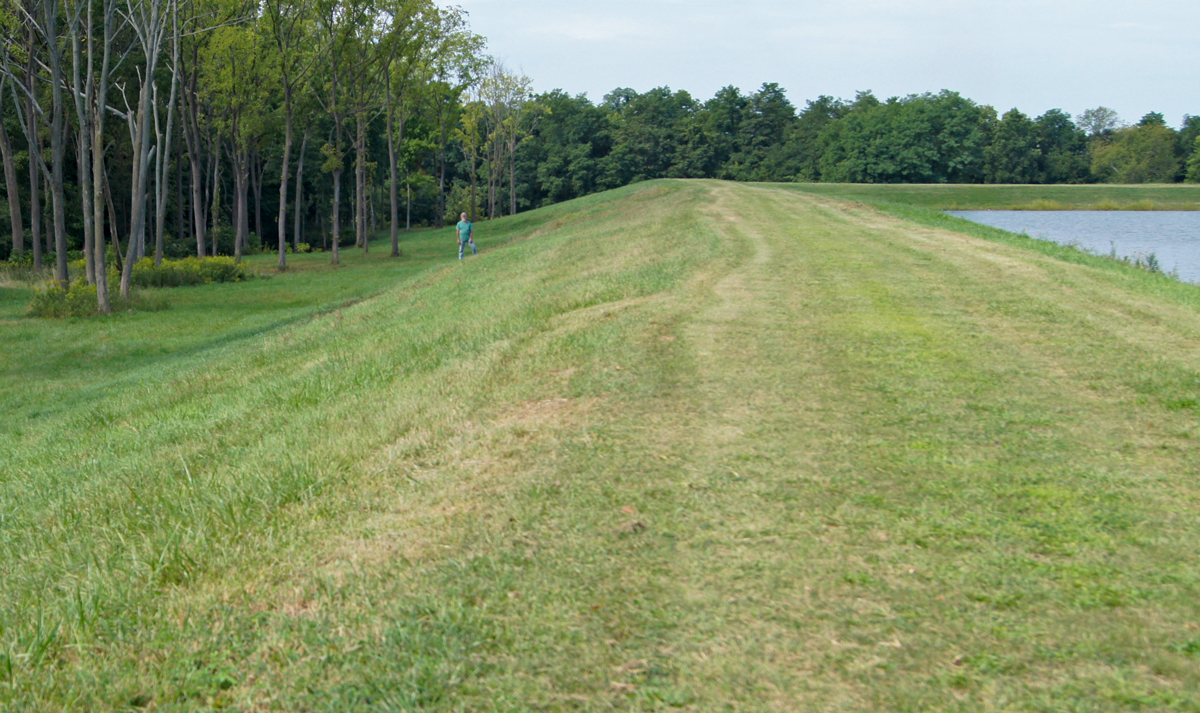 John and Becky Moriarity built a dam on their property in the late 1990s to accompany their pond, resulting in years-long legal issues that reached the Indiana Supreme Court in 2019. (Photo courtesy of the moriaritys)

Becky Moriarity predicted that her family’s battle with the Indiana Department of Natural Resources over a dam on her property will continue until the day she dies.

“It’s been a 20-year nightmare that you can’t wake up from,” she said.

Becky and her husband, John Moriarity, began building a large pond on their property in the 1990s and built a dam to hold back water in certain areas. But they ran into a problem with the DNR in the early 2000s, when the agency attempted to exercise jurisdiction based on its determination that the dam was located in, on, or along a course of ‘water.

The Natural Resources Commission ultimately ordered the Moriarities to correct what the DNR considered “significant safety defects” in the dam and bring it into compliance with Indiana Code § 14-27-7.5, also known under the name Dam Safety Act.

After the Moriaritys were fined $10,000 for past violations of the law and were defeated both at trial and on appeal, they received an adverse final result in the Indiana Supreme Court in 2019.

Becky said she felt like her family’s case never stood a fighting chance.

“In administrative courts, they almost always decide for themselves,” she said. “No matter what you offer, whatever the agency offers trumps yours. You don’t stand a chance.

A bill proposed in the 2022 Indiana legislative session attempted to address Moriarity concerns by requiring trial courts to adjudicate disputed factual issues de novo in a judicial review of certain actions of the agency.

Republican Rep. Chris Jeter, R-Fishers, said he authored House Bill 1063 in an effort to level the playing field between decision-making agencies and Hoosiers.

Jeter, founding partner of Massillamany Jeter & Carson LLP, said constituents approached him with concerns about how administrative agencies interacted with citizens and the power they wielded.

HB 1063 passed away from the Indiana House but was not called for a hearing at the last meeting of the Senate Judiciary Committee on February 23. Courts on judicial review of an agency action should have decided all questions of law and fact de novo and without deference to any prior interpretations made by the agency.

Jeter’s bill sought to shift the burden of proof to the agency to defend its decision, rather than the current norm requiring individuals or others to prove that an agency’s enforcement actions were illegal. It also would have amended the judicial review section of Indiana’s Administrative Orders and Procedures Act.

Jeter said he thinks the changes could give citizens in conflict with environmental agencies a fairer chance to succeed in court.

“I think agencies, when left to their own devices, gain power and influence,” he said. “I think it’s sometimes easy to lose sight that these agencies exist to serve and help people do what they need to do.”

What’s in a word?

The Moriaritys had asked the High Court whether the DNR properly exercised jurisdiction over their dam, asked about the reasonableness of the DNR’s definition of the word “stream” and what, if anything, the Moriaritys had noticed of this definition.

In the majority opinion, the justices noted that neither the Legislative Assembly nor the MNR had defined the word “watercourse” for the purposes of the Dam Safety Act. Therefore, MNR has defined a watercourse as “water flowing in a defined channel”, with neither the size nor the regularity of the water flow determining the presence of a watercourse. .

The Supreme Court found that the definition conformed to the clear, ordinary and usual meaning of a “watercourse” and was therefore reasonable. The court also ruled that the Moriarities failed to demonstrate that the DNR’s exercise of jurisdiction over their dam based on the wording of the statute was arbitrary or capricious. Moreover, he ruled that they had been sufficiently informed of the applicable definition of “flow”, despite the couple’s assertion to the contrary.

Judge Geoffrey Slaughter dissented, however, saying he would not have given deference to the ministry’s interpretation of ‘flow’ because the prerogative to interpret the law authoritatively rests with the high court, not at the DNR.

“An agency rendition that’s ‘reasonable’ but not ‘best’ isn’t good enough,” Slaughter said. “Allow an agency reasonable interpretation to prevail over our better the interpretation ignores our unique “legislative function”…which includes our “inherent constitutional duty to act as the final and ultimate authority” in pronouncing Indiana law.

Jeter pointed to Slaughter’s dissent as support for HB 1063. He said it was a good example of why he drafted the bill, because for him, Moriarity seems to be a point where the high court has started to shift its review and defer more to an agency.

Kim Ferraro, senior counsel and agricultural policy director at the Hoosier Environmental Council, countered that the dissent only argued that the majority was not properly applying the existing standard.

“Courts are supposed to decide legal issues and (have) no deference to the agency,” Ferraro said. “So Slaughter was just saying, ‘Court, you’ve applied the wrong standard.’ He didn’t say we’re not supposed to abide by the factual findings of the agency, so I think this bill goes a lot further than the concerns of the Moriarity Case.”

Jeter said he doesn’t think the bill would impact too much on the judicial review process, but would only change the approach courts take to such cases.

“I think it will expand their ability to look at them and figure out who was really right without giving anyone a head start,” he said.

Ferraro disagreed, saying the bill would mar administrative and judicial review processes involving the Office of Environmental Adjudication and appeals of its decisions.

One of the main areas of concern, she said, was the removal of deference to OAS findings of evidence.

“With no deference to legal or factual findings, you are starting from scratch. It’s kind of a free-for-all and it would make the administrative review process somewhat meaningless,” she said. “It’s a total waste of resources.”

She also expressed her concerns about shifting the burden of proof. Currently, if the Indiana Department of Environmental Management or industry seeks judicial review, Ferraro said the onus would be on them to show the OAS was wrong.

Greg Ellis, vice president of energy and environmental policy for the Indiana House, also opposed the legislation. He said the bill would have impacted many agencies to which AOPA applies, including licensing agencies like IDEM and DNR.

“It was going to create a heavy burden for the lower courts,” he said, adding that it would also burden businesses by costing more money. “You are doing two separate but essentially the same procedures.”

DNR and IDEM spokespersons declined to comment on the pending legislation. Nancy King, IDEM’s general counsel and deputy commissioner, told Indiana Lawyer in an email that IDEM is “closely following the bill and ongoing discussions about it.”

“This is one of the few times an environmental public interest organization is in agreement with entities and stakeholders that we’re usually on the other side of the fence with,” Ferraro said. “It should say a lot that something is wrong with this bill.”

If HB 1063 becomes law, Becky said her family would be able to present evidence in court that they never had a chance to present at the start of their case.