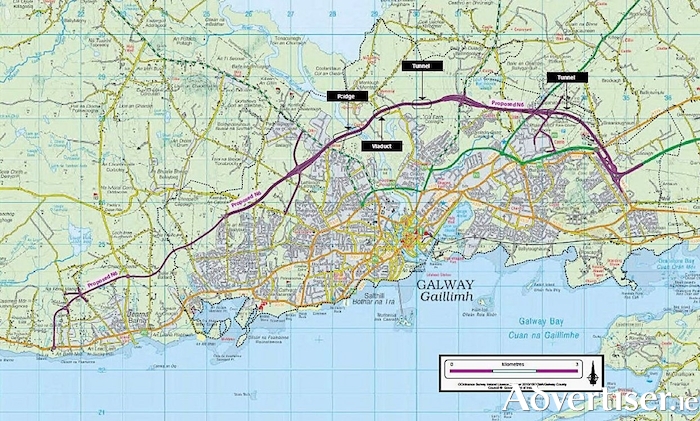 Two actions in the High Court have been brought this week over the granting of planning permission for the Galway City Ring Road.

The court granted the Galway Race Committee leave to conduct a judicial review of An Bord Pleanála’s clearance for the €600m route which would run from the existing M6 to the east of the town at Barna to the west.

Friends of the Irish Environment (FIE) have brought separate proceedings against the Board, Ireland and the Attorney General over the approval. His request for leave has been adjourned until Monday.

The race committee, represented by Dermot Flanagan SC, lodges a complaint against An Bord Pleanála. It seeks to reverse council’s December 2021 decision to approve the development of the road and the N6 Galway City Ring Road 2018 motorway scheme and the county council’s 2018 protected road scheme.

In court documents, the race committee said part of the proposed road development involves the construction of a 240m tunnel under Galway Racecourse in Ballybrit, north of the racecourse. He said his current stables would be lost as a result of the construction of the tunnel.

He alleges that the planning board “erred” by failing to provide appropriate mitigation measures for the racecourse as part of the road development approval.

The council failed, according to the committee, to provide reasoned conclusions to reject the recommendations of its own inspector by excluding from the authorized development the permanent acquisition of certain land, called plot 713, for the provision of permanent stables for the racecourse .

In addition, among its grounds for challenge are a number of points of EU law, including that the council’s decision is invalid due to its alleged failure to conduct an EIA in accordance with Article 1 of the Directive. on environmental impact assessment (EIA).

The committee also claims that the council acted in breach of the public participation requirements of the EIA Directive and the Aarhus Convention by allegedly not providing any opportunity for the committee and/or the road authority to address the “impacts deep” of its decision to exclude the replacement stables.

In a statement to Advertiserconservation charity Friends of the Irish Environment [FIE] confirmed that in the High Court Judge Humphries had given them leave to make amendments to their application for judicial review of Galway City’s N6 Ring Road project, including the addition of the Minister for Housing, Planning and Local Government as a notice party, and adjourned the matter for one week.