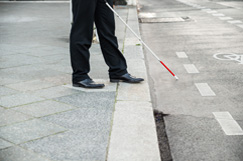 The Department for Transport (DfT) is facing judicial review over its guidance on tactile paving, after a claimant accused officials of ignoring research vital to the safety of blind and visually impaired people.

The High Court has allowed the judicial review hearing into the issue of standard curb heights, which was brought by Sarah Leadbetter, who is visually impaired and uses a guide dog or cane to navigate the streets independently.

Ms Leadbetter argued that the latest government guidance fails to take account of research by University College London in 2009 which found that a minimum curb height of 60mm was needed to prevent a blind or partially sighted person from s get lost on the road.

Ms Leadbetter said: ‘I am very relieved, and I am sure many other blind and partially sighted people will be too, to hear that this judicial review is continuing and will be heard in the High Court.’

‘The guideline update was a long time coming and I was devastated to learn that the height of the curb needed to keep me safe when working with my guide dog or when I had to use a long white cane n was not fixed at 60 mm.

“Anything below that height just won’t do, it won’t keep me or my guide dog safe. There’s a reason a curb should be 60mm, it keeps you out of harm’s way, directly on the road with moving traffic, which is extremely dangerous and disorienting for someone who is blind or visually impaired.

The DfT made specific provision for the use of lowered curbs to ensure that people in wheelchairs or mothers with prams could cross the road, Ms Leadbetter and her supporters say a mandatory height of 60mm could have be used elsewhere.

Andrew Hodgson, chairman of the UK National Federation of the Blind, said: “This problem has been around for a long time and we have seen lowered curbs and even curbs removed altogether in new street layouts.

“We actively provided evidence to the Department for Transport through its consultation process on the guidance update and it was ignored. The ability of even blind and visually impaired people to navigate the urban environment independently is at stake here. We need to know instantly if we are walking on the road to ensure our safety and there can be no confusion during the process.

“The Guide cannot be accepted because it is simply not fit for purpose and needs to be torn up and started over.”

Elizabeth Cleaver, solicitor at Bindmans LLP, said: “In granting leave, the court recognized that the wider public interest was engaged in Ms Leadbetter’s claim, which is self-evident given that she concerns the ability of blind and partially sighted people to navigate the built environment safely and independently.’