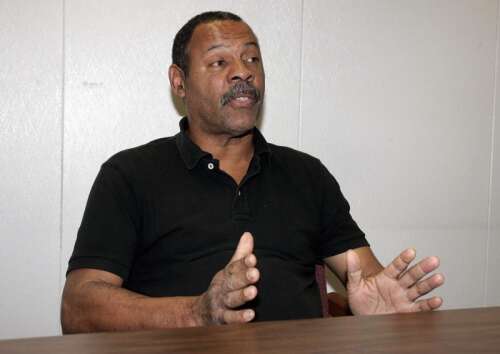 No justice: Raymond Davis’ request for a judicial review from the Historic Land Losses Commission has still not been heard (file photo)

A request for a judicial review of the legitimacy of a commission of inquiry into land grabbing could not be heard – because judges in the island’s civil courts were in conflict.

Raymond Davis, also known as Khalid Wasi, said the failure to find an impartial judge to hear his case demonstrated the justice system was “in a deplorable state and appears to be acting against natural justice”.

He added: “It is aimed at strong institutions, even government, and needs an independent review of its shortcomings.”

Davis and Myron Piper filed the application for judicial review over concerns that the Historic Land Loss Commission of Inquiry was a sham and that the commissioners had failed to act impartially.

The application was filed in January. Normally, these requests are processed on an urgent basis and a review date is set within a few days.

Mr. Piper and Mr. Davis filed a complaint with the Ombudsman after two months without hearing anything.

They finally received an email from court clerk Alexandra Wheatley in late March.

Ms Wheatley explained that three judges had considered the request and concluded that they could not hear it because they were all in conflict.

She added that an associate judge – Jeffrey Elkinson – had been identified who would consider the merits of the request and hear it if it goes ahead.

But Mr. Piper and Mr. Davis opposed the nomination and said Mr. Elkinson was also in conflict.

Ms Wheatley said in her email: “I apologize for any difficulty you may have had in receiving a response on the status of this matter.

“In addition to the normal processing time, we had to find an associate judge to handle your cases because all the judges in the civil/commercial section of the Supreme Court are in conflict.

“This process required three judges to review the case in the first instance to determine if it is in conflict, which would also increase the processing time.”

It is understood that Mr Elkinson has since stepped down from the case.

Mr Davis said he would ask the governor, through Chief Justice Narinder Hargun, to request that a UK judge be brought to hear the judicial review application.

He added that he hoped that once his complaint is heard, the CoI findings would be overturned and a royal commission would be appointed to carry out a second inquiry into the land grab.

He said: “The recently released CoI report contains material inaccuracies, which should be addressed publicly.”

Mr Davis added that he had researched cases of land theft and had been willing to provide details to the commission, but had been refused.

He said: “All of this information is publicly available if research is done. Why didn’t COI do this research? Why did they hire investigators and were they skilled in looking for land titles?

“The CoI started with suitably qualified title searchers, then got rid of them for two ex-police officers with questionable real estate experience.”

Mr Davis listed factual errors which were “significant enough to show the inaccuracy of the report and the bias by which the CoI operated”.

He said: ‘The commissioners and their investigators behaved more like politicians with a bias than impartial fact-finding investigators.’

“The only recourse to rectify this erroneous information is a judicial review.

“There are other issues, too numerous to mention, where the best recommendation might be to set aside the entire report as is and ask the Crown to have a full and impartial royal commission.

“If we can remember when the governor withheld assent, it was because he asked if there was merit or enough complaints to warrant a commission. It’s fair to say that now we know.