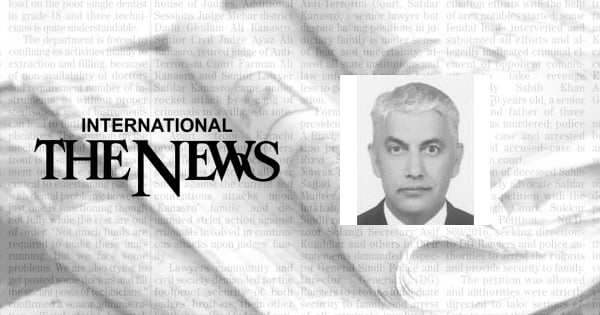 The author is a Supreme Court Advocate and former Additional Attorney General of Pakistan.

Democracy in Pakistan has been interrupted by successive military interventions four times. All three constitutions – 1956, 1962 and 1973 – promised parliamentary democracy.

It is argued that judicial review of legislation on grounds other than those permitted ends up weakening the democratic process which is already fractured by military interventions and the discrediting of politics while other institutions are irresponsible and immune despite the allocation of decision-making powers affecting the fate and future of the state.

Courts must recognize the primacy of parliament in the constitutional system and should only declare a law unconstitutional if clear evidence is established by a person aggrieved by the law and if the impugned legislation offends the conscience of fundamental constitutional rights or is enacted without jurisdiction legislative.

It is also argued that the practice of summoning prime ministers under the sword of Damocles – powers of contempt – or under the power of judicial review, a more common and recent phenomenon, seriously undermines democracy and constitution. Prime ministers or presidents have never been summoned by supreme courts for matters relating to the exercise of their functions in the history of common law jurisdiction. If the conduct of a judge cannot be discussed (and summoned) by parliament (article 68), then a prime minister, being a representative of the people, cannot be summoned by the courts in the exercise of his functions under section 248.

With the introduction of written constitutions, in common law countries, the doctrine of ultra vires was developed by the courts. In cases arising from Canada under the British North America Act of 1867 and other colonies with written charters, the Judicial Committee of the Privy Council has enunciated several basic principles relating to legislative powers and federal principles .

Several doctrines have been developed to determine the powers of the respective legislatures, including the doctrines of pith and substance and occupied field and severability, etc. Since the British Empire was in favor of a strong central government, there was a tilt in favor of federal governments. The doctrine of ultra vires (an extension of the rules applicable to delegated legislation), also known as the doctrine of legislative competence, provided the only basis for challenging legislation before the bills of rights. The jurisprudence of the 19th and early 20th centuries revolves around these doctrines. Moreover, since the right to legislate belonged to the provinces or the federation, the locus standi to challenge the legislation was therefore vested in the respective governments through the Attorneys General.

With the incorporation of bills of rights into constitutions, especially after the addition of certain rights to the American constitution and more particularly after the Universal Declaration of Human Rights, an additional limit was recognized to legislative powers. Contrary to the doctrine of ultra vires, a law incompatible with fundamental rights is void. The constitution confers jurisdiction on the higher courts (high courts and Supreme Court) and the word “person” used in its article 199 has been extended to parliament by giving a judicial gloss to the expression “body politic”; therefore, the courts have the power to declare a law unconstitutional. If the intention of the framers of the constitution had been to include parliament as defined in section 51 in the definition of “person” as used in section 199, he would have said so.

There was a reason for this omission. The three branches of government are co-ordinate branches as far as the constitution is concerned. None is subordinate to the other. Over the years, however, the judiciary has unfortunately been assumed to be superior to the other branches. It has no textual support in the constitution.

The wording of Article 8(1) taken in its true context is as follows: a law inconsistent with a fundamental right of a citizen/person is void. When the state enforces this law, the court simply considers it void – unenforceable. However, by importing case law from other countries to interpret the constitution, especially when there are no two identical constitutions in the world, the courts make fatal errors in interpreting the constitution.

The Hisba Bill (2005) was canceled when it was not even enacted as law. In the case of Baz Muhammad Kakar, the contempt of court law was declared void as it violated Article 204 of the constitution. In Durrani’s Ceramics (2014), despite the existence of a double constitutional prohibition, tax legislation was declared void as incompatible with article 73 of the constitution. In Contempt (2013), the Sindh Civil Servants (Amendment) Act 2011 was declared null and void (and upheld in the Ali Azhar Baloch case) on the ground that it was inconsistent with Sections 4 (not a fundamental right), 9 and 25 and 240. It should be noted that the theory of not-is is by no means universally accepted and applied.

The constitution is based on a trichotomy of powers with the sole purpose of placing the rights and freedoms of the people beyond the reach of any particular branch of government. It also recognizes checks on these powers and limits on jurisdiction (section 175(2). The expansion of the grounds for judicial review of legislation beyond sections 8 and 142 of the constitution resembles the jurisdiction of equity of the 19th century in England which developed with the foot of the chancellor – which undermines Parliament and creates uncertainty.