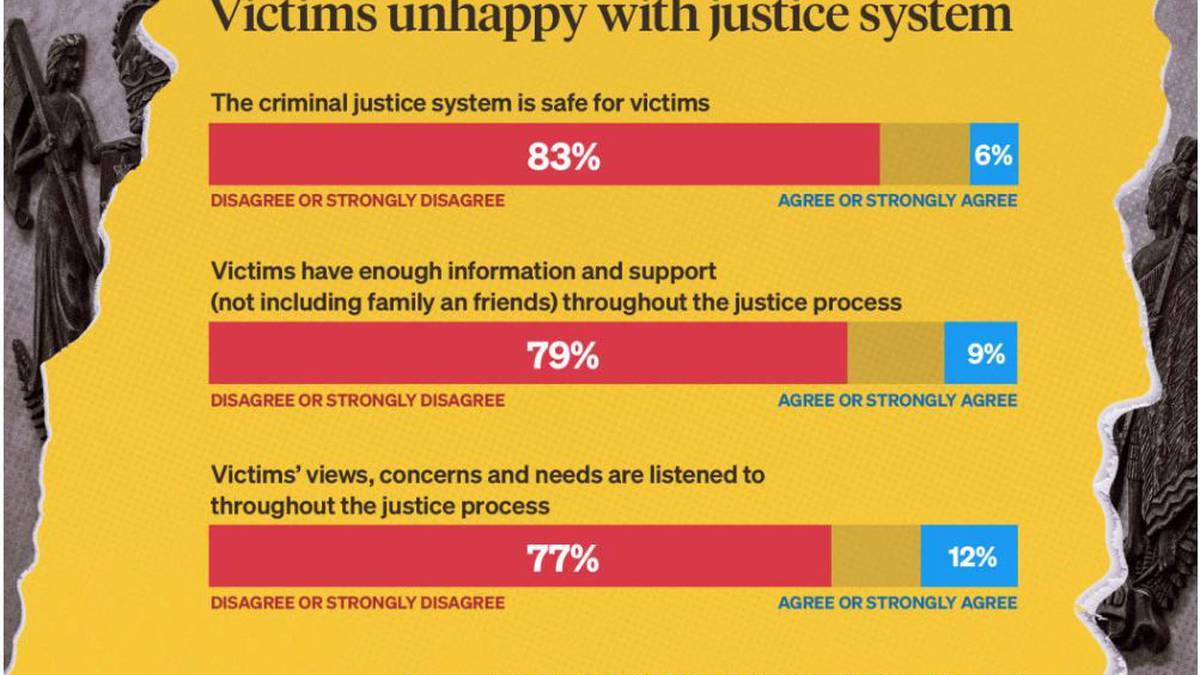 Victims dissatisfied with the justice system – statistics from the Department of Justice. Photo/RNZ/Vinay Ranchod

Journalists shine a light on our justice system, exposing important cases and systemic issues. They do so despite the obstacles within the courts and the uncertainty of where the money will come from to pay for the reports.

In June, RNZ investigative journalist Guyon Espiner appeared on Morning Report to talk about the hurdles he faced navigating the justice system to cover the case of a man shot dead by police.

Shargin Stephens was shot dead by officers after attacking an empty police car with a weed trimmer.

Espiner had worked with Stephens’ family to uncover the events leading up to his death, including his being subjected to ‘ninja-style’ nightly bail checks by officers who described themselves in emails like “nightstalker bros”.

But that effort was hampered after a coroner – without evidence – accused the family of leaking court documents to the media.

That coroner – JP Ryan – also banned the media from covering the inquest into Stephens’ death, in a ruling that had been in force for a year before being overturned by the High Court.

Espiner is one of a growing number of journalists shining a light on our justice system, and he’s not the only one facing obstacles inside the courts.

Stuff’s Kirsty Johnston recently won the Voyager award for best journalist, in part for a story she wrote about a woman called Ms P, who had been falsely accused by a judge of lying about being a victim of domestic violence.

In what has become a common problem for her, Johnston struggled to obtain court transcripts to cover the case.

She told Mediawatch that it is difficult to properly review district courts in particular, given that they hear thousands of cases a year and their judgments are not routinely made public.

“The lack of access to court information – what actually happens in court and what is in the court record – makes it nearly impossible to scrutinize the justice system.

“We preach the principles of open justice – but we don’t practice them,” she said.

Johnston is motivated to negotiate these pitfalls because of what she sees as significant and often overlooked inequalities within the legal system.

In the introduction to the Tell Me About It podcast, which she co-hosts with colleague Michelle Duff and producer Noelle McCarthy, she talks about a “system rigged against women and minorities.”

NZME, owner of the Herald and Newstalk ZB, are also devoting additional resources and attention to the courts.

He recently received nearly $3 million from the Public Interest Journalism Fund for his Open Justice Te Pātiti project, which is funded to employ 15 specialist journalists to cover everything from the Supreme Court to the Leases Court.

The project has increased the coverage of our courts across the country, including several in small towns and regions that have not been regularly reviewed for some time.

People involved in Open Justice told Mediawatch that journalists had been asked to leave the courts by staff members who were unaware that they were allowed to be there by law.

The stories generated by the project receive a million or more clicks per week, and some have had a real impact.

Earlier this month, Open Justice Te Pātiti reporter Jeremy Wilkinson reported on an opportunistic scam artist who has been preying on immigrants and young tenants for years.

Judith Webby posed as a landlord using a variety of false names – and although her scams had been exposed on Fair Go in the past, she still did so because those who reported her to the police were told that It was simply a rental business. – and she never showed up for the hearings.

It wasn’t until Wilkinson recently reported a relatively murky Human Rights Review Tribunal decision against Webby that the full gamut of his repeated offending and bullying was exposed by the Herald and several other outlets across the country.

Despite these successes, the future of Open Justice is far from guaranteed. Its funding expires in September next year, although the NZME may apply for additional funding in either of the last two rounds of the PIJF.

RNZ has examined the justice system at a more systemic level with a recent project by its In Depth investigative team titled Is This Justice?

It revealed, among other things, that Pākehā are dismissed without conviction and have had the name removed at higher rates than Māori; that 90% of High Court and Court of Appeal judges are Pākehā; and that judges could preside over the cases of people they know.

In Depth editor Veronica Schmidt says the series was driven in part by personal experience. She recently went through a years-long ordeal after being filmed without her permission in a K-Mart locker room.

At the end of an article she wrote for RNZ describing her experience, she pointed to some of these inequities in the system, wondering if she could have gone through the legal process if she had been traumatized by a more serious crime. , or whether she could even have sued in the first place had she not had access to childcare or paid time off.

“I am a privileged person and I was the victim of a relatively minor crime and it took me a lot of effort to get justice. So how much does the system cost the less privileged? serious crimes?” she wrote.

Schmidt told Mediawatch that the experience of the justice system was an eye-opening experience in itself, and his sense of surprise grew as the In Depth team unearthed stories for the series.

She felt it was imperative for journalists to focus more on the inequalities that prevent some people from accessing justice.

“Guyon and I were both surprised by some of the things we had seen in the system, and also when our team discovered things, we were shocked by some things and if we didn’t know about them, we thought that other people didn’t know either, so there probably weren’t enough spotlights on the system.”

After the exhibition Is this justice? reports came out, Stuff obtained a leaked email from Chief Justice Dame Helen Winkelmann (GNZM) that spoke of “inaccurate accounts” in the media about the makeup of the judiciary.

Schmidt said some staff in the justice system were likely unaccustomed to media scrutiny, as financial constraints and New Zealand’s growing population have made it harder for news outlets to cover stories. hearings as fully as in the past.

She praised reporting by Johnston and projects like Open Justice for shining a light on a vital pillar of society, and called for more funding to allow them to continue.

“The problem is that most people can’t go and sit in courtrooms every day to see if a guy they’ve invested money with is in the dock for fraud or a guy to whom they entrusted their children is on the dock for abuse.

“They rely on the media for that, to report what’s going on.”