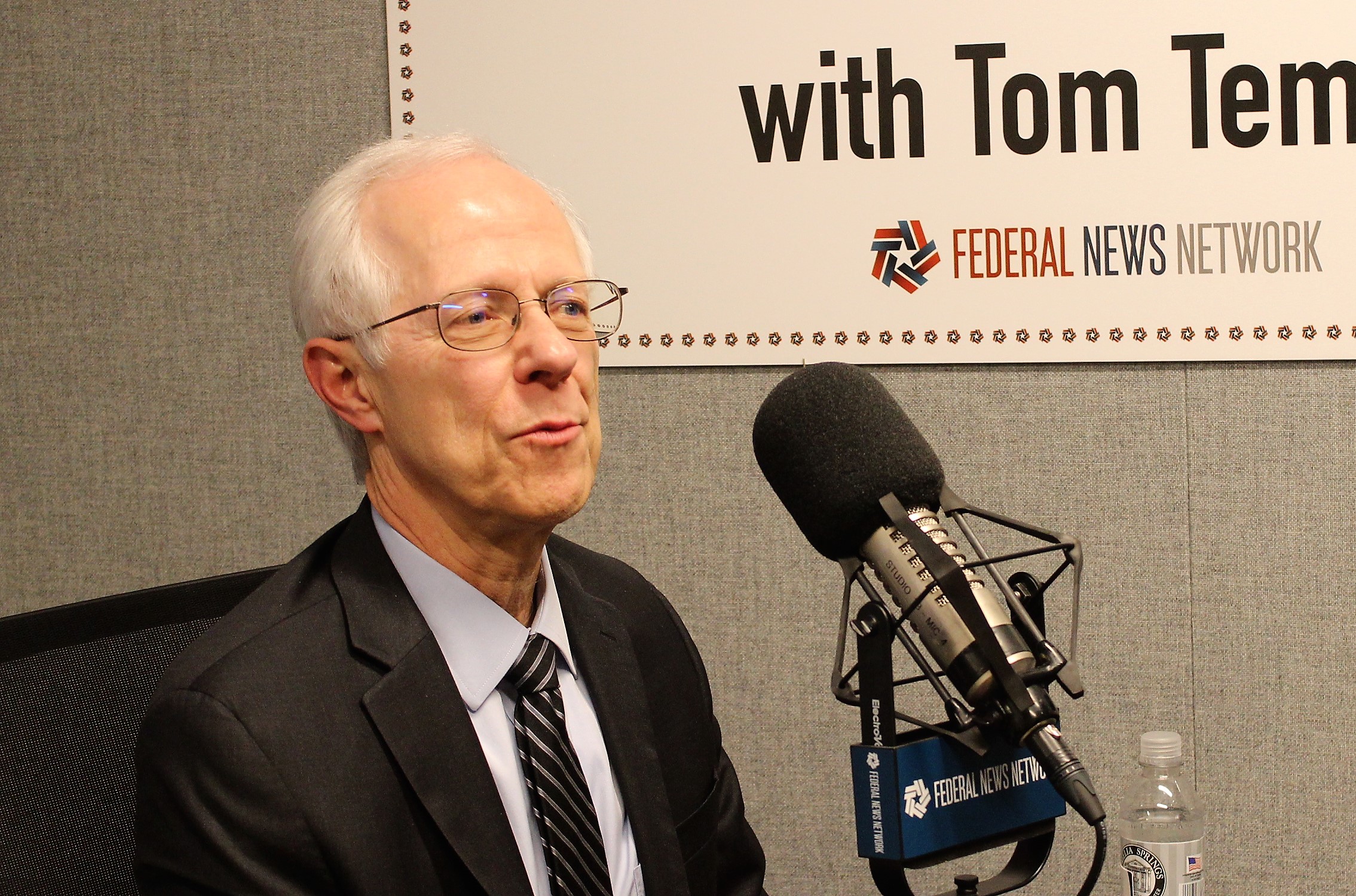 The best listening experience is on Chrome, Firefox or Safari. Subscribe to Federal Drive’s daily audio interviews at Apple podcasts Where Podcast One.

Who exactly is responsible for enforcing labor law when it comes to federal contractors? The short answer is the Office of Federal Contract Compliance Programs, which is part of the Department of Labor. But this is not the complete answer. A federal acquisition rule that has been banned by Congress is raising its ugly head agency by agency. The Federal Drive with Tom Temin had the latest news from the President and CEO of the Professional Services Council, David Berteau.

Tom Temin: David, tell us more about this rule that somehow looks like a zombie. And you see his bony hand coming out of the grave here?

David Berteau: Well, Tom, as you know, in government no idea is ever really completely resolved, it can always come back. And we see that happening now with something going back to the Obama administration, there was an executive order called the very, very nice title of Fair Pay and Safe Workplaces. Well, who’s against it? Right. But its implementation through the Federal Acquisition Regulation was that an allegation of an employment law violation could result in a contractor being essentially blacklisted, i.e., ineligible to receive a contract. It’s an allegation. It’s not a condemnation. It’s not a lawsuit. There’s not even an admission of guilt in a settlement, okay. And so it was put forward in the Federal Acquisition Regulation. It was enjoined, its enforcement was enjoined by a federal district court in 2015, or 2016. And then in early 2017, Congress, through the Congressional Review Act, forcibly removed it, in d in other words, eliminated the settlement itself. It was five years ago. Now, what we saw creeping in earlier this year in the agricultural acquisition regulations, even if you have some very dedicated listeners, it’s probably not that many of them read the AGAR in the Federal Register. Notice that when it came out this was buried in a bunch of technical amendments, but it was a resurrection of the basic idea. With the Department of Agriculture responsible for labor rights violations, we have indications from some of the system’s observers that other agencies are considering similar rules. Now PSC has commented on this, on this project that AGAR

Tom Temin: Right. Because federal contracting rules, which have a basis in law, are designed to be fair to everyone. And you can’t do things based on negative actions on allegations unless they’re fundamentally proven.

David Berteau: It’s correct. And that’s how it should be. This is the nature of law in America. And it’s a rule of law in the federal procurement process. This is what we must continue to do.

Tom Temin: How did this come to light, you said it was buried in a bunch of technical amendments. So someone was reading the AGAR?

David Berteau: Well, one of the benefits that PSC brings to our members is that we cover all federal agencies. And so we don’t just look at the Federal Acquisition Regulation of the Defense Supplement, the DEFARS that often comes into play. But we monitor everything and our members monitor everything. They therefore only had 30 days to respond. We filed the extension request, we didn’t receive it or we didn’t hear anything about the extension request and filed the comments. And we are ready to start again. So that’s because we cover all the federal agencies and all the little nits and noise of federal procurement regulations that run through those agencies.

Tom Temin: It’s a wonder they even bothered to do a review. Sounds a bit overbearing.

David Berteau: Well you must be wondering what the intent is here, right, a GS-15 from the Department of Agriculture woke up one morning and said we’d like to enforce federal labor law to contractors. I doubt it a bit. But I don’t know what the plan is. I believe one possibility is that the waiver of this process by the Congressional Review Act may be considered to apply only at the FAR level, at the OMB Office of Federal Procurement Policy level in level of the FAR Council, that if each agency does it in its own regulations, it would not be subject to the ARC. That’s not our view on it. But there isn’t much history about the actions of the Congressional Review Act over time.

Tom Temin: We speak with David Berteau. He is President and CEO of the Professional Services Council. And another topic I wanted to talk to you about here. This is the latest report from the Special Inspector General for Afghanistan Reconstruction. There were some elements that weren’t quite right for entrepreneurs.

David Berteau: Well, you remember a year ago now the president announced that we were withdrawing all our forces from Afghanistan and they started the process. I need not tell the story of the fall of Kabul and the emergency evacuation of over 100,000 people from Hamid Karzai International Airport last August. But SIGAR released its interim report on the collapse on how quickly the collapse unfolded. And the report itself and a number of former military officers who had commanded in Afghanistan made comments that the contractors somehow retracted. And that led to the collapse. Well, there is no doubt that the necessary contract support for the Afghan National Security Forces is something they lacked as soon as it dwindled. But it is also true that most of these contractors were following the advice or request of the federal government with whom they had contracted. I don’t know of anyone who has done any actions on their own. In fact, in many cases, a specific agency, which I won’t name in the program to protect businesses, and Afghans still inside Afghanistan. Their contracts continued even after the fall of Kabul, even after the evacuation was completed. So blaming all of this on the contractors seems to me to be both misleading and unnecessary for the future, especially since we have yet another war going on.

Tom Temin: There is language in the introduction to this report that says that the military, the US military, withdrew support from the contractors quite early before the collapse. So I mean, there’s this.

David Berteau: In many cases, the contract itself required the US military or US government to provide security. And so once that security is gone, entrepreneurs are in a bit of a pickle. And many of them had to start operating in a way that probably protected their workers and their work, while doing the work. It was a mess. And there are a lot of lessons to be learned from the fact that the SIGAR report doesn’t really give you the right lessons, I’m afraid.

Tom Temin: And just quickly, I wanted to ask you about a new bill regarding organizational conflict of interest that was tagged by the Senate Homeland Security and Governmental Affairs Committee, and it appears to relate to a single company?

David Berteau: Well, there is certainly a long-standing set of rules regarding organizational conflicts of interest and the Federal Acquisition Regulation and its various supplements have a lot of implementation language associated with that. But there’s also a lot of power left to contracting officers and programs on how to handle this going forward. You want that flexibility to be there. Thus, the government can respond to its needs. This particular case, this bill was generated by a series of hearings and reports both in the House and in the Senate on a company that was doing business with private sector companies. And with an agency at the same time, the agency was the Food and Drug Administration, the private sector companies were a drug manufacturer. And at least there was the potential in the appearance of individuals who work for both sides of this over a relatively long period of time, eight or nine years, whether or not an actual conflict occurs remains to be determined, in my opinion, but the bill will actually require additional acquisition regulations to prevent this sort of thing from happening. The bill itself does not actually create this language which will have to be done through the Federal Acquisition Regulation and the FAR Council.

Tom Temin: Well, maybe you could include something in this bill to prohibit what Agriculture does with its regulations.

David Berteau: Well, one of the things that’s useful to recognize, Tom, even if it’s only you know, on June 1, Congress and the Senate don’t have many legislative days left. When this Congress comes to an end in December, it will cease its activities and the new Congress will come into force as voted at mid-term. Without many legislative days. That means there’s not a lot of legislative vehicle, so we have to watch every bill very, very carefully.

Tom Temin: David Berteau is President and CEO of the Professional Services Council. As always, thank you very much.

David Berteau: You’re welcome, Tom. Expect the next one.