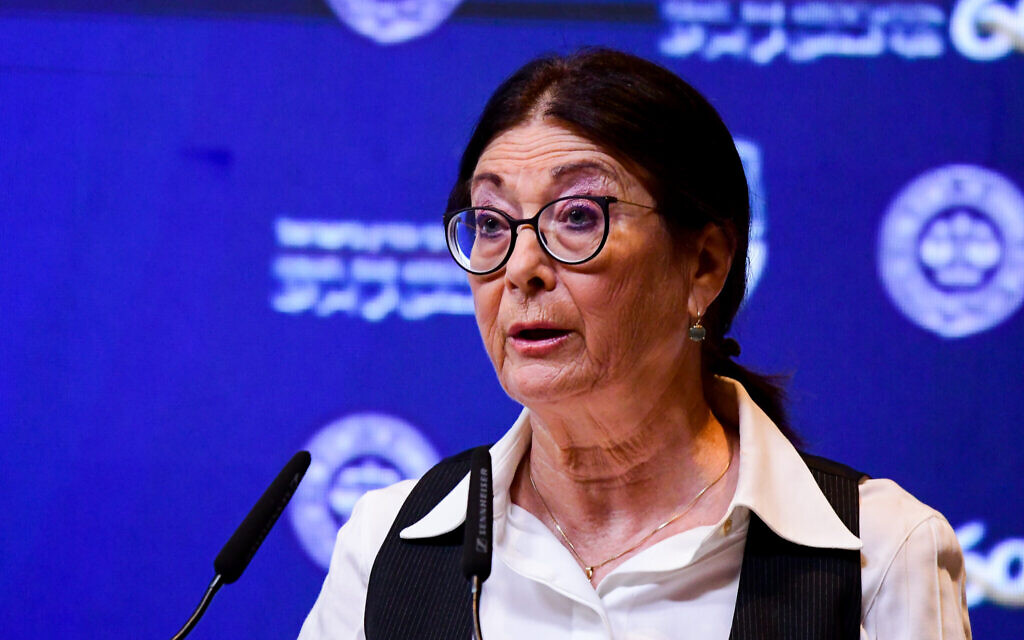 “Unfortunately, civil dialogue and personal accountability have given way to confrontational rhetoric that has spawned attacks on the justice system and its judges and strident calls to harm them and curtail their powers,” Hayut said in a statement. speech given at the Israel Bar Association conference in Eilat.

Hayut’s comments followed an attack by Regional Cooperation Minister Esawi Frej on a Sunday decision by the Jerusalem Magistrate’s Court that appeared to legitimize Jewish prayer on Jerusalem’s Temple Mount.

The court, in a nearly unprecedented decision, ruled in favor of three Jewish teenagers who were temporarily barred from the Temple Mount compound after bowing down and reciting the “Shema Yisrael” prayer.

In his ruling, Judge Zion Saharay said he did not consider bowing down and saying a prayer as sufficient grounds to restrict freedom of religion lest it cause unrest at the site.

Regional Cooperation Minister Esawi Frej attends a meeting of the Meretz faction in the Knesset on February 28, 2022. (Yonatan Sindel/Flash90)

“It reminds me of how an idiot can burn down an entire forest,” he said. “This is not a judicial decision, but a political one.”

The five-decade status quo allows non-Muslims to visit but not pray on the Temple Mount, the holiest site in Judaism and home to Islam’s third-holiest shrine.

“Everyone has a place to pray, with the Temple Mount for Muslims and the Western Wall for Jews,” Frej said. “The majority want things to continue as they are. You must not play with fire. We are heading for an escalation.

Hayut said while the court’s criticism was welcome, the speech should remain “civil and respectful”.

“We can talk about the errors of the court and the need to appeal or request another hearing,” Hayut said. “But much to my dismay, public discourse today…is deteriorating and going to places we’ve never seen before, […] and these are extremely dangerous places.

She accused such talk of stemming from politicians’ “dream of destroying” the Supreme Court.

Right-wing lawmakers have for years accused the court of overstepping its mandate and encroaching on the authority of the legislature by striking down laws and other policies it deems unconstitutional.

During an event marking Israel’s 74th Independence Day earlier this month, lawmaker Yitzhak Pindrus said his dream was to “blow up” the Supreme Court.

A member of United Torah Judaism, a Haredi opposition party, Pindrus made the inflammatory statement during a panel hosted by the Nehora High School yeshiva in the West Bank settlement of Mevo Horon.

The Supreme Court president previously defended the judiciary in February after opposition lawmaker David Amsalem claimed that Hayut and his colleagues held racist views against Mizrahi Jews. In response, Hayut wrote a letter of complaint against Amsalem’s remarks, which followed a warning letter she had filed against him last year.

You are a dedicated reader

We’re really glad you read X Articles from The Times of Israel over the past month.

That’s why we started The Times of Israel ten years ago – to provide discerning readers like you with must-read coverage of Israel and the Jewish world.

So now we have a request. Unlike other media, we don’t have a paywall in place. But since the journalism we do is expensive, we invite readers to whom The Times of Israel has become important to support our work by joining The Times of Israel community.

For just $6 a month, you can help support our quality journalism while benefiting from The Times of Israel WITHOUT ADVERTISINGas well as access Exclusive content only available to members of the Times of Israel community.

Thanks,
David Horovitz, founding editor of The Times of Israel